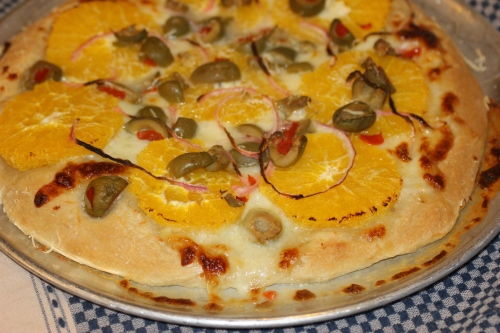 After having such success with my very first homemade pizza Friday night, I decided to branch out a little with the second one!  The recipe for pizza dough from Linda at Savoring Every Bite makes two pizzas.  For the second one, a few nights later, I couldn’t help but remember the orange salad I made the other day.  The sweet, flavorful oranges mixed with thinly sliced red onion and salty green olives was so tasty I thought it should be made into a pizza!  Who knows, perhaps it will become a classic! 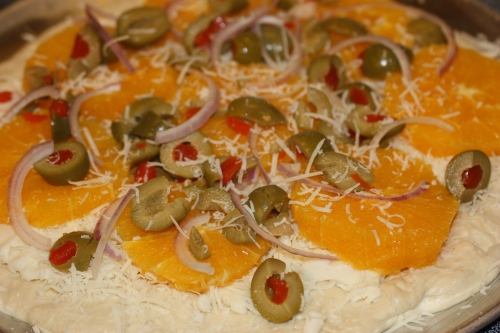 After preparing the dough according to Linda’s recipe, add some shredded mozzarella and pecorino romano cheeses.  Peel two large oranges with a sharp knife, leaving no pith.  Slice and add to the pizza.  Add a generous handful of roughly chopped large green olives and some thinly sliced red onion.  I added just a bit more of the pecorino.  Bake at 425 degrees for about 18 to 20 minutes.  A very different taste for a pizza, but one I think you will enjoy!  Ritchey loved it – and so did my sister!