What could be better than traditional Swiss Fondue?  We certainly couldn’t say since it’s been on the menu for New Year’s Eve the last twenty-five years or so!  Good friends Debbie and Dennis have sat at our table each of those years.  When our children were young we ordered pizza – there are pictures of the three of them (Linton and Kate and David – D&D’s son) sitting at a tiny table just their size munching away!  Of course as they grew older they began to appreciate the lovely cheeses that make up a proper fondue.  Our party number has varied throughout the years – boyfriends and girlfriends have come and gone.  Other friends have graced our table now and then, but it’s always been the four constants at each and every year-end party!

Ritchey’s dad was a missionary and the family was stationed in exotic locations throughout the years.  Belgian Congo was home for three years during the 60’s, after a one year stint in Belgium to hone their French!  It was back to the States for a couple of years and then Switzerland – where Ritchey lived for 8 years.  This man could tell many, many stories!  But the one we’re interested in today is fondue!

While in Switzerland, every Saturday night during the winter, fondue was on the menu!  Each little village there has a cheese shop – and their own secret recipe for fondue!  You just tell them how many people and they give you the proper amount of cheese.  Ritchey and Rickey, the twins, were chefs for the evening – and have now been dubbed the ‘fondue gods’.  As no one else in their family made fondue during all those years, only they now have the experience and authority to make the rest of the family beg for a night of fondue – yes, it does happen at times other than New Year’s Eve!  Linton’s February birthday is usually celebrated with a large pot.  When the Brown’s gather together for a weekend, there is always a fondue night!  Preparing for 30 is a little more crazy than 8, but 4 times the fun!  My ace in the hole is that Linton and Kate have watched their dad make fondue over the years and perfected their own skills, so now I have 3 personal ‘fondue gods’!  Guess I’ll never have to worry about learning the craft myself! 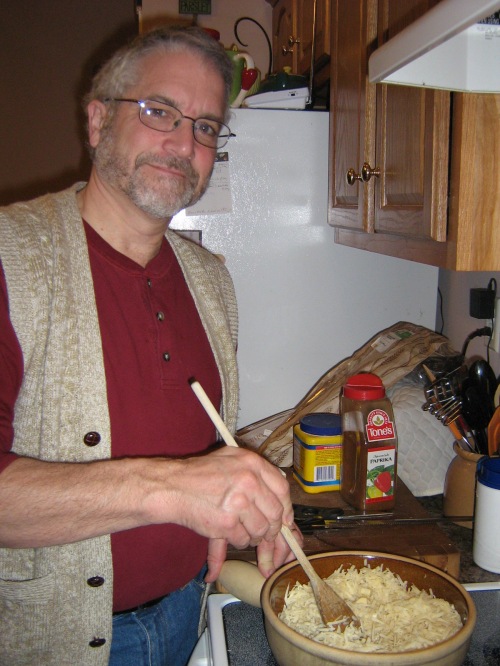 On New Year’s Eve Ritchey is head chef and I am relegated to ‘sous chef’!  A roll I don’t mind at all!  I peel and chop garlic – lots and lots of garlic!  I shred mountains of cheese!  I cut loaves and loaves of bread into cubes!  Okay, perhaps that is a slight exaggeration!  But not by much!  We love our fondue!  Everything is prepared before the cooking begins so that when that lovely pot of cheese is ready we are ready to start dipping!  French bread, sourdough, pumpernickel!

It is hard to describe just how good Ritchey’s fondue tastes!  That’s generally all we eat!  Occasionally we’ll have a salad before fondue preparations begins, but this is what we’ve waited for!  Conversation comes almost to a halt.  And as we get to the end we wait for the best part – for the crust to form.  Now this is where it’s very important to use a ceramic pot – Ritchey brought his with him when he came back in 1977.  His fondue pot has been with him longer than I have!  The crust will not form in a metal pot.  But in a ceramic pot the cheese forms a crust when the pot is emptied.  It is a lovely brown color, crisp and, oh, so good!  We all must have a taste! 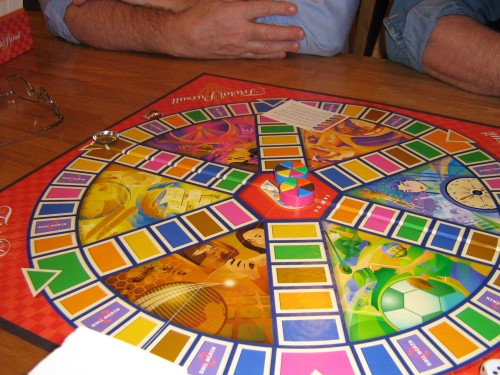 And after the fondue is a lovely memory, the Trivial Pursuit Game begins – men vs. women.  Sometimes these games have gone on for hours.  Snacks and dessert are set out at some point – and, of course, a toast of champagne at midnight!  Silly hats, beads and lots of fun are part of the evening.  Even Baxter gets in on the action! 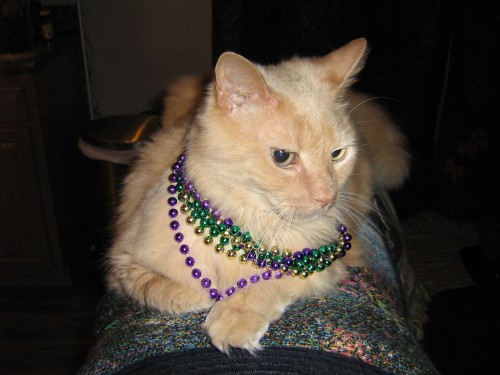 New Year’s Eve is very special since that’s the night, many years ago, we met.  And we’ve been together since!

Shred the first two cheeses, cut brie into pieces.  Have other ingredients ready before you start cooking – have the burner on the table ready, bread cut into cubes, etc.  Hot tea is the preferred beverage to serve with fondue – along with a glass of white wine.  We also have a jigger of kirsch for each person.

Mix one jigger of kirsch and 1 tablespoon cornstarch in a small cup.  Rub the fondue pot with 4 or 5 garlic cloves.  Mince 8-10 cloves of garlic – add to the fondue pot.  Add cheese.  Add wine, 1 deciliter per person, possibly more.  On medium high heat cook the cheese and stir in figure eights until it begins to boil.  At first it will be a bit hard to stir, until the cheese melts, but persevere!  Stir kirsch and cornstarch again and pour into fondue.  Add one tablespoon butter.  Sprinkle in a little paprika, nutmeg and pepper.  Have someone light the burner and transfer fondue pot to burner.  Dip bread into fondue and enjoy!